The clock strikes one

The clock strikes one

So that’s 14 January 2022 circled in the diary and a few hours cleared in the schedule for that day.

A brand new album by Elvis Costello and the Imposters – “urgent, immediate songs with bright melodies, guitar solos that sting and a quick step to the rhythm.”

The first single has certainly whetted the appetite; Magnificent Hurt is a terrific track with pleasing The Beat-meets-Momofuku vibes. It’s also such a Costelloesque title I’m amazed it’s taken this long for him to use it. I can’t wait to hear the new record in full.

While we await the arrival of A Boy Named If, I feel I’m still trying to get to grips with its predecessor; Hey Clockface is a year old this week and such a dense record that I still haven’t yet fully absorbed it all.

This is a good thing, though, I think. Some records land instantly and fade quickly like a sugar rush while others reveal their depths and layers over a longer period of time.

Hey Clockface is definitely in the latter category for me. Some of the tracks were immediate: No Flag with its scything guitar riffs and the beautiful Byline.

Other songs have crept up on me over time. I may have mentioned this on an episode of the podcast but I was listening to the album one day earlier this year when I was struck by how great The Last Confession of Vivian Whip is. I’d always enjoyed it on previous spins of the record but it was suddenly elevated to standout track status.

Another big favourite of mine is Revolution #49. I love the bold artistic choice to open the record with a vaguely unsettling, Arabic-sounding spoken word number. I’d be intrigued to find out more about the process by which Elvis settled upon his speaking voice for this track and Radio Is Everything.

Guests on the podcast have spoken about their favourites on the record, choosing a number of songs from Hey Clockface for their playlist picks: the title track, Newspaper Pane, Hetty O’Hara Confidential and They’re Not Laughing At Me Now have all featured.

As an album, Hey Clockface is still revealing itself 12 months on. “Intriguingly genre-less” in the words of Variety’s Chris Willman, it doesn’t sound like anything Elvis has done before and presumably won’t sound anything like The Boy Named If and that’s testament to Costello’s restless creativity and curiosity.

As the man himself puts it on this album: “I don’t spend my time perfecting the past. I live for the future because I know it won’t last.” 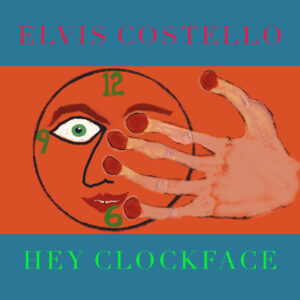