Allow me to go off topic slightly in this article to delve into a subplot that’s developing on the podcast: my attempts to rehabilitate one of Paul McCartney’s most maligned albums.

I was first “outed” as a fan of this record by Tom Doyle at the start of the year, with Chris Mercer rounding off 2021 by reminding Dangerous Amusements listeners of my love for this particular LP.

So, I’m now saying it loud and proud: I really dig Press To Play.

Macca’s 1986 record is, of course, routinely dismissed as a clunker, supposedly an embarrassing blot on his discography and trashed even by those who made it, Paul included.

Well, that’s nonsense. Or, should I say, It’s Not True.

Without being a classic, Press To Play is a Macca album I always enjoy going back to; it has a clutch of outstanding songs, a boatload of interesting arrangements and musical ideas and is different enough from his other records to give it a distinctive character.

It’s also a hinge point in McCartney’s solo career, as he moves from being a contemporary chart artist into fulltime Beatle Paul, dedicated keeper of the Fab flame.

I have a clear memory of buying Press To Play. I snapped it up as a teenager at the same time as Tug Of War following the 1993 remastering campaign. I vividly recall sitting on the cold, yellow metal seats at Liverpool’s Paradise Street bus station, poring over the stereo drawings in the booklet while I waited for my bus home. I made it in seconds flat.

I was well aware of the reputations of these two records; Tug Of War was Paul’s solo masterpiece, while Press To Play was a dog. Only a fool would favour the latter. Well, here I am, proudly wearing that crown.

The opening salvo of Press To Play is ace; Stranglehold is one of Macca’s most effective album openers, while the excellent Good Times Coming/Feel The Sun and beautiful Footprints sandwich the best track on the album.

Talk More Talk is simply superb. I first heard it on our local radio station before I had the album; a guest on Spencer Leigh’s BBC Radio Merseyside programme picked it out as an example of how McCartney’s musical style was constantly evolving. Why this wasn’t the lead single, I just don’t know. It’s a brilliant slice of art rock with creatively nonsensical lyrics, infectious hooks and great vocal/instrumental performances. Lose the unnecessary drum machine and it’s pretty perfect. Sleazy instruments, half-talked, half-baked ideas.

The aforementioned Footprints, incidentally, features on my fantasy McCartney unplugged setlist. I like to imagine Paul and his band in the early noughties setting out on a tour of theatres and symphony halls performing acoustic deep cuts from his post-Beatles catalogue. If you’re not up for the accordion-led With A Little Luck or solo piano version of Somedays that float around in my brain, don’t buy an imaginary ticket.

Press To Play sags in the middle (more on that in a moment) but delivers the goods again later on with Move Over Busker and However Absurd. The first is a muscular rock track with a terrific guitar sound, glorious bridge and a witty lyric featuring Errol Flynn, Nell Gwynne and Mae West. However Absurd is a surreal epic that deserves to be far better known.

If you’re a CD listener like me, you’ll also consider three additional tracks as a welcome part of the canon: Write Away, Tough On A Tightrope and It’s Not True.

The latter encapsulates the best sonic elements of the uneasy alliance between McCartney and producer Hugh Padgham; a physical production with beefy guitars and what we might describe around these parts as a big fuck-off drum sound. Excellent stuff.

Unfortunately, Macca has dropped the creative ball a few times by this point in the record, courtesy of a couple of slight missteps and a pair of absolute clangers.

In the first category are Pretty Little Head and Only Love Remains. The former is a great, vibraphone-heavy soundscape desperately in need of a better lyric than the guff about hillmen carrying spices and trinkets. He’s hit the post with this one. Bonus points, though, for the cameo by Trigger from Only Fools and Horses in the promo video. Wotcha, Dave.

Only Love Remains is superficially a good song. It has lots of the elements present in some of Paul’s finest ballads, with its lush orchestration and beautiful (live) vocal. However, it smacks of Macca-by-numbers. He knows how to effortlessly turn out stuff like this on autopilot (see also from this period: Same Love, Loveliest Thing, Beautiful Night etc) but it completely lacks the emotion and inspiration of his finest love songs like Maybe I’m Amazed and Calico Skies.

It’s also a shocking choice for a single. When you’ve made an arty, challenging album, don’t put out a saccharine, middle of the road ballad to represent it to a wider audience; performing it for the Queen Mother settled its fate as well as that of McCartney’s mid-‘80s image.

Even worse, though, is the not-actually-angry-at-all, Angry. Paul seemingly feels the need to get worked up about something and this dud is his attempt to convey it. There’s no anger here, just pure contrivance. That it was performed by the potentially awesome power trio of McCartney, Phil Collins and Pete Townshend makes it worse – imagine what these three could do with a proper song.

Well, I guess I can’t put it off any more. I have to mention Press. Urgh. Unquestionably, my least favourite McCartney song. I mean, this is seriously awful: that cringey count-in he does; the Gary Glitter-influenced refrain; that entire incomprehensible Oklahoma section; the synths; the mugging at the camera in the studio promo clip (“Cheapest video I ever made!”). Horrendous. And he put it out as a single. Mindblowing.

It doesn’t sink the album, though, for me: there’s still plenty of credit in the bank from the record’s highlights. With a few better editorial decisions (take out those four weaker tracks and bring in the gorgeous Yvonne’s The One, sadly later butchered by co-writer Eric Stewart), Press To Play would enjoy an enhanced reputation among you non-believers out there.

That does, of course, raise the interesting question of whether McCartney and Elvis Costello would have collaborated if Press To Play had been a greater commercial and critical success? Would Paul have so readily taken up his manager’s suggestion that he and Costello write together if he hadn’t taken such a mauling for Press To Play and Give My Regards To Broad Street?

It’s an intriguing question and one we’ll never be able to answer. If a critical kicking for Press To Play helped us get the wonders of the McCartney/MacManus collaboration then maybe it was a price worth paying. Perhaps we had to endure Press in order to enjoy So Like Candy?

Clearly the time came. The plan had begun.

The wonderful 80sography has a lengthy interview with Hugh Padgham which covers these sessions and is well worth checking out.

My recent guest Chris Mercer also talks all things Press To Play with the much-missed Ryan Brady on the marvellous Take It Away.

Enjoy a robust defence of Macca’s ’80s output on the impressively prolific Paul or Nothing. 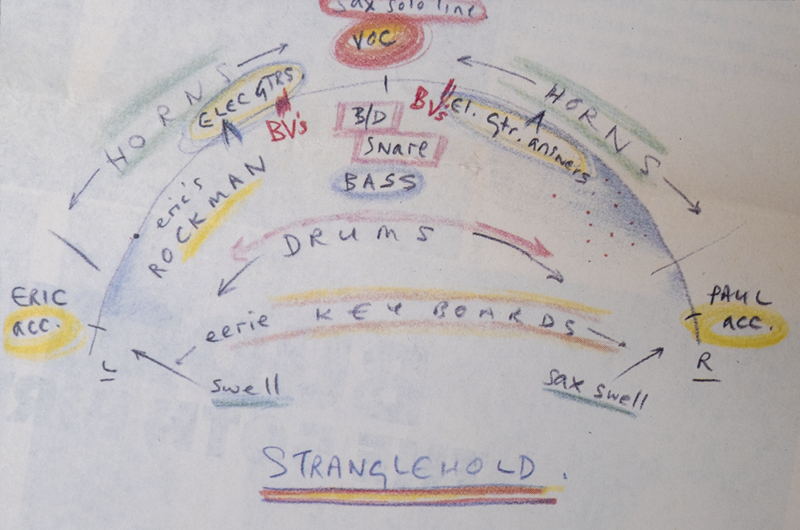